Scientists have been searching for it for decades: the enzyme that cuts the amino acid tyrosine off an important part of the cell’s skeleton. 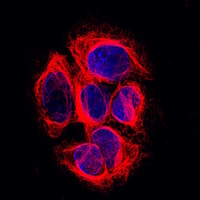 Just like the human body as a whole, each human cell has a skeleton it needs for functioning properly. That so-called cytoskeleton allows a cell to maintain its shape, move to different places and transport molecules through its interior. Long chains called microtubules (see image*) form an important part of that skeleton and function as a highway for the transport of molecules. For example, microtubules play a key role in cell division by allowing the cell to meticulously align their chromosomes before dividing them amongst daughter cells. Their crucial importance to the cell is easily illustrated by the working mechanism of a widely used group of cancer medicines called taxanes: they disrupt microtubule function and thereby kill dividing cells.

It has been suggested that proper transport at this crucial moment in the cell cycle involves detyrosination, in which the amino-acid tyrosine is removed from the tail of one of the microtubules’ main building block:  α-tubulin. Over the past four decades scientist have been searching for the main actor in this process. Despite its importance for several cellular processes it remained unknown which enzyme takes off the tyrosine.

Researchers of the Netherlands Cancer Institute have now solved this puzzle by unmasking the mystery player. By using their recently developed innovate genetic screening method Joppe Nieuwenhuis and his colleagues identified the small SVBP protein as being a crucial part of the process. This small protein binds – and thereby stabilizes – proteins called vasohibins, which appear to have tubulin detyrosination activity. Nieuwenhuis: “These findings are surprising, because vasohibins were thought to function outside the cell and only recently it was predicted that these proteins might function as enzymes, without knowing their function.”

Now just how did Nieuwenhuis and his colleagues at Thijn Brummelkamp’s lab find these key molecular players? By using genome wide random mutations in human cells containing just one copy of each gene. Subsequently they selected the cells in which the studied process of detyrosination was broken due to one of the randomly introduced mutations. Selecting the cells with very little detyrosinated tubulin they discovered these cells had a mutated (and therefore dysfunctional) SVBP gene. Further experiments confirmed the interaction with vasohibins and its effect on tubulin detyrosination.

“For cell biologists this could be an important step”, says Nieuwenhuis. “We have found a piece of the puzzle that scientist have been staring at for many years because the process of detyrosination was discovered 40 years ago. This knowledge could be relevant to further understand the processes of mitosis, cell migration and cancer development. It is already found that the invasive front in some tumor tissues, where cells are migrating most actively, contains a high amount of detyrosinated tubulin. It is interesting to speculate that inhibition of detyrosination could be beneficial under certain conditions.”

Interestingly, in the same edition of Science a group of French scientists reached similar conclusions using a biochemical approach to identify detyrosinating enzymes.

more about the netherlands cancer institute