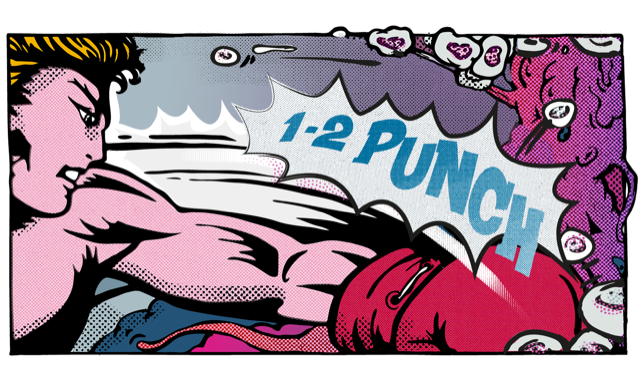 A classic boxing move, the ‘one-two punch’, could also be effective against cancer: a left jab knocks cancer cells senseless, quickly followed by a right hook that knocks them out altogether.

Researchers at the Netherlands Cancer Institute have shown that cancer cells are vulnerable to this kind of approach. “This is a beautiful, universal principle, that could be used for all forms of cancer.” On October 2nd the researchers publish their results in Nature.

Many combinations of cancer medicines could theoretically work very well together, but in practice these combinations are too toxic for the body to withstand. The researcher René Bernards has devised a possible alternative: the ‘one-two punch’, named after the effective combination of two quick successive punches in boxing. “The first medicine creates a weakness in the cancer cell and the second deals a merciless blow to the weakened cell. So while the two medicines are not given simultaneously, you still get the benefit of their synergetic effect.”

At the Netherlands Cancer Institute, Bernards and his colleagues investigated whether this worked. As the cancer cell’s weak spot they chose a well-known cell reaction to stress: senescence. Under stressful circumstances ordinary body cells can put themselves into a kind of sleep mode. They do so, for instance, if their DNA is damaged. This is useful, because they then stop proliferating and the body’s own immune system can clear them up.

In the laboratory Bernards and his colleagues found a way to bring this about in liver cancer cells. This was doubly useful: the cells stopped proliferating, and they had a vulnerability that could be exploited, since the researchers also discovered a way to knock out the ‘sleeping’ cells. Working with liver cancer cells, the researchers finally identified a combination of medicines that had good results in mice (see box). On October 2nd they publish the results of their experiments in Nature.

“The great thing about this approach is that it could work for a wide range of tumour types,” says Bernards. “In principle, senescence can be induced in all kinds of tumours.” Provided you know how, and how you then deal the sleeping cells a death blow. Bernards recently founded a company, Oncosence, which is entirely devoted to identifying substances that induce senescence in cancer cells and other substances that kill these specific cells. The second ‘punch’ is essential. “It seems that senescent cancer cells can actually encourage tumour growth and metastasis if the immune system, or a therapy, does not remove them.”

The idea of the ‘one-two punch’ arose out of earlier research in which researchers at the Netherlands Cancer Institute exploited a weak point in resistant skin cancer cells in order to destroy them. “The principle of exploiting a weakness was one we wanted to apply more widely, and we identified senescence as a universal response that could be used in this way.” Having been awarded a substantial grant by the European Research Council, the research group is now searching for different ways to induce senescence in cancer cells.

What did the researchers investigate?

With a large-scale genetic screen the researchers identified a protein whose inhibition induces senescence in liver cancer cells: CDC7 kinase. By subjecting senescent cancer cells to a great many chemical substances, they discovered that the common antidepressant sertraline could kill the senescent cells. Once they had identified how the drug had this effect (through the cell’s mTOR signal route), they could start searching for drugs that performed this even more effectively. In laboratory mice they then combined a CDC7-inhibitor with an mTOR-inhibitor, both of which are already used in research and which have been individually tested on cancer patients. The result: twice as many mice survived in comparison with those receiving current standard treatment.

This research was partly funded by the Dutch Cancer Society through Oncode Institute and by the European Research Council.

About the Netherlands Cancer Institute

The Netherlands Cancer Institute is at the international forefront of cancer care and research for already more than a century. The unique combination of health care and scientific research within the same institute offers great benefit for cancer patients. Specialized cancer care professionals work together in multidisciplinary teams every day to set up and carry out treatment plans tailored to the needs of individual patients because no two tumors are alike. Cancer patients or people suspected of having cancer can come to our hospital, known as the Antoni van Leeuwenhoek, to make use of this personal approach and the state-of-the-art research and treatment facilities. The research institute employs more than 650 scientists investigating many aspects of cancer development, diagnosis, treatment and epidemiology. Scientists at the Netherlands Cancer Institute have access to state-of-the-art research facilities supporting their basic, translational and clinical research. This scientific research could not be carried out without the institutional support of the Dutch Cancer Society, the Ministry of Health, Welfare and Sport, the many research grants obtained by our researchers from (inter)national funding agencies, and the generous donations made by individuals that support our research program. The Netherlands Cancer Institute is the only OECI designated Comprehensive Cancer Center in the Netherlands.