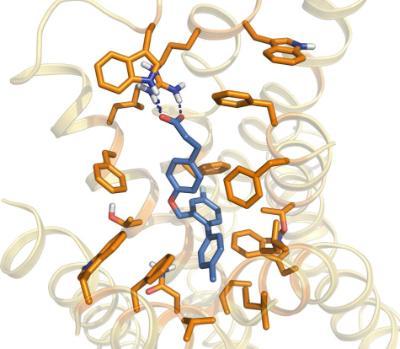 Breakthrough research has revealed a new drug that may prevent the spread of malaria, and also treat people suffering with the deadly parasitic disease.

The findings, which were delivered by an international team of scientists led by the University of Glasgow and published in Science, offer fresh hope in the global fight against malaria.

Malaria is caused by the Plasmodium parasite, which infects humans through the bite of a mosquito. The parasite then grows in the liver and in red blood cells in our blood. Parasites can also change in the blood to take on a male and female form, which can re-infect mosquitoes when they bite and suck blood from infected people.

Now, scientists led by Professor Andrew Tobin of the University of Glasgow, have discovered a drug that can kill the parasite at all three stages of its life cycle – when it is in the liver, in red blood cells, as well as preventing sexual development of the parasite.

The new drug works by stopping the activity of an essential protein called PfCLK3, which controls the production/activity of other proteins that are involved in keeping the parasite alive. By blocking this protein’s activity, the drugs can effectively kill the malaria parasite, which not only prevents it spreading, but also holds the possibility of treating the disease in humans too.

Professor Tobin, Professor of Molecular Pharmacology at the University of Glasgow, said: “We are tremendously excited about these new findings, and hope they pave the way for the first step in the eradication of malaria. Our work has shown that by killing the parasites at the various stages of parasite development, we have not only discovered a potential cure for malaria but also a way of stopping the spread of malaria from person to mosquito which can then infect other people.”

The drug – a potent compound found by scientists after a rigorous screening process – works by stopping the activity of the essential protein PfCLK3. This protein forms part of a system that controls the production of proteins in the parasite, and by inhibiting it, the parasite cannot make many of the proteins that it requires to survive.

Professor Andy Waters, Director of the Wellcome Centre for Integrative Parasitology at Glasgow and a co-author of the study says: “By inhibiting PfCLK3 we have shown that the production of proteins necessary for the survival of the parasite is stopped and this kills the parasite at multiple stages”

The study was funded by Wellcome, The Medical Research Council (MRC) and Tres Cantos Open Lab Foundation. The work was done in collaboration with GlaxoSmithKline, the University of California, University of Leicester, Royal Melbourne Institute of Technology, the University of Oxford and The MRC Unit the Gambia.


More on Malaria and this discovery

The malaria parasite exists in a number of different forms in humans. When the parasite enters the human body through the bite of a mosquito, the parasite makes its way to and then enters the liver. This is called the liver stage, and at this stage the parasite grows within the liver cells and divides into many thousands of parasites. These new parasites are then released into the blood stream where they invade our red blood cells (the oxygen-carrying cells in our bodies).

When the parasite invades the red blood cells, this begins the stage of the disease that results in the symptoms of malaria, and which can result in the death of the infected person in serious cases.

When a mosquito bites an infected person, and takes up a blood meal, they take up the male and female gametocytes which turn into gametes. Then, in the gut of the mosquito the male gamete fertilises the female gamete to generate a new moving parasite capable of infecting the mosquito. Parasite multiplication on the outside of the gut produces lots of infectious parasites that are then able to migrate to the salivary gland of the mosquito where they can be released into the next person through the bite of the infected mosquito.

Importantly, inhibition of the PfCLK3 protein can kill the parasite at all three stages of its life cycle – in the liver, in the red blood cells, and by preventing the formation of male and female gametocytes. This means that the drug would be predicted to successfully treat people with malaria, relieving the symptoms and prevent the spread (transmission) of the parasite.