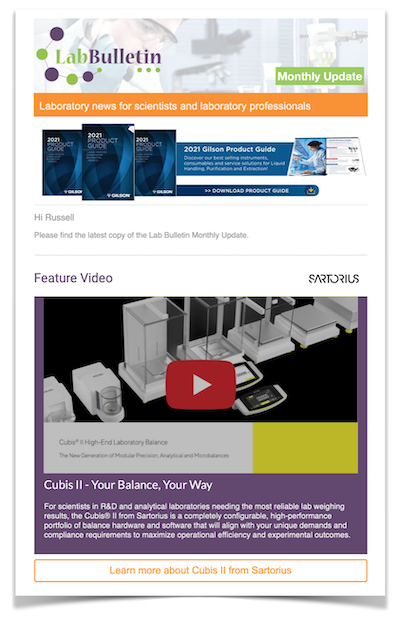 The life science group Sartorius confirmed its preliminary figures for 2020 upon the release of its annual report. Group sales revenue surged by 30.2 percent to nearly 2,336 million euros in constant currencies (reported: +27.8 percent).

Order intake1 grew even more dynamically than sales revenue and was up 49.0 percent in constant currencies to 2,836 million euros (reported: +46.2 percent). Pandemic-related orders accounted for close to 14 percentage points of growth. Sartorius invested substantially in expanding its capacity in 2020 in order to meet high demand. The ratio of capital expenditures (CAPEX) to sales revenue remained in the double digits, at 10.3 percent, despite strong sales growth (previous year: 12.3 percent).

“In an extraordinary and very challenging year, Sartorius performed outstandingly. We recorded strong growth and were able to complete several key strategic acquisitions. At the same time, many of our products have been playing an essential role in overcoming the pandemic, in areas ranging from diagnostics, to the development of vaccines and therapeutics, to their production. For the current year and beyond, we expect growth to remain strong. That’s why we are accelerating the ramp-up of our production capacities yet again, primarily at our sites in Germany, Puerto Rico, China, and South Korea. Our mid-range targets significantly raised now set goals of achieving 5 billion euros in sales and creating more than 1,000 new jobs on average per year,“ said Executive Board Chairman and CEO Joachim Kreuzburg at today’s virtual press conference.

In 2020, underlying EBITDA1 also rose very significantly, showing an overproportionate increase in relation to sales revenue, by 39.6 percent to 692 million euros. The respective margin climbed year over year from 27.1 percent to 29.6 percent. Economies of scale in the Bioprocess Solutions Division primarily played a role in this substantial increase in profitability, yet the underproportionate development of costs in some areas as a result of the pandemic also added to this effect, such as the significant reduction of business travel as well as fewer new hires in non-production areas. The most recent acquisitions had a slightly positive effect on the earnings margin, while currency headwinds had a somewhat dilutive impact. Relevant net profit1 for the Group rose in relation to sales, by 42.9 percent to 299 million euros. Underlying earnings per ordinary share were 4.37 euros (previous year: 3.06 euros) and per preference share, 4.38 euros (previous year: 3.07 euros).

Due to the company’s positive business performance, the Executive Board and the Supervisory Board will submit a proposal at the virtual Annual Shareholders’ Meeting on March 26, 2021, to pay dividends of 0.71 euros per preference share and 0.70 euros per ordinary share. Therefore, the total amount disbursed under this proposal would be 48.2 million euros.

Business development of the regions

The Group increased its revenues by double digits in all three geographies yet again. Particularly in the regions of EMEA2 and the Americas, Sartorius benefited from additional demand in connection with the development and manufacture of coronavirus vaccines and Covid-19 therapeutics. Revenue in the Americas, which accounted for about 35 percent of total Group sales, rose sharply, also because of the acquisitions, by 32.8 percent to 812 million euros. Sales revenue in the EMEA2 region that contributed the highest share of around 40 percent to total Group revenue amounted to 935 million euros, up 28.4 percent. Generating around 25 percent of Group sales, the Asia | Pacific region recorded sales revenue totaling 588 million euros, a gain of 29.6 percent. (All figures in sales revenue growth in constant currencies)

Sartorius invested substantially in expanding its capacity in 2020 in order to meet high demand. The ratio of capital expenditures (CAPEX) to sales revenue1 remained in the double digits, at 10.3 percent, despite strong sales growth (previous year: 12.3 percent). Equity rose at year-end from 1,093 million euros to 1,402 million euros. The equity ratio of the Group continued to remain at a solid level of 29.9 percent even after closing of the acquisitions and the increased balance sheet total due to a significantly expanded cash position (December 31, 2019: 38.1 percent). Net debt to underlying EBITDA1 increased as expected, from 2.0 at year-end 2019 to 2.6 for the period ended December 31, 2020.

At the end of 2020, the Group employed 10,637 people worldwide. Compared to the prior-year headcount, this number was thus 1,601 higher. The increase resulted primarily from hiring additional production staff at the company’s manufacturing sites with especially high capacity utilization. At the end of the reporting period, around 7,100 people were employed in the EMEA2 region, more than 1,900 in the Americas and about 1,600 in the Asia | Pacific region.

Business development of the divisions

Both divisions contributed significant rates to sales growth. The Bioprocess Solutions Division that offers a wide array of innovative technologies for manufacturing biopharmaceuticals expanded at an exceptionally dynamic rate in the reporting year, with sales up 34.4 percent to 1,783 million euros (reported: +32.0 percent). In addition to strong organic growth across all product categories and geographies, pandemic effects added up to an estimated 12 percentage points of which the majority was attributable to additional sales in connection with the ramp-up of production capacities for coronavirus vaccines and Covid-19 therapeutics. Close to 5 percentage points of the division’s growth was due to consolidation of the most recent acquisitions.

Order intake1 developed even more strongly than sales revenue, soaring 56.4 percent in constant currencies (reported: +53.5 percent) to 2,238 million euros, with the pandemic effects described above having a positive impact of around 17 percentage points.

Underlying EBITDA1 of the Bioprocess Solutions Division was 576 million euros, up 46.5 percent very significantly above the prior-year figure of 393 million euros3. Due to economies of scale and pandemic-related underproportionate cost development to some extent, the division's respective margin was up year over year from 29.1 percent3 to 32.3 percent. Currency headwinds had a slightly negative impact, while the most recent acquisitions did not have any significant effect on the division’s earnings margin.

The Lab Products & Services Division specializing in equipment and technologies for life science research and pharmaceutical laboratories achieved a sales increase in 2020 of 18.1 percent to 553 million euros (reported: +16.1 percent). Acquisitions contributed about 15 percentage points; the net impact of various countervailing pandemic effects added up to minus 1 percentage point. Thus, the division was confronted in the first half with an extremely challenging economic environment, especially in China and the USA, due to the pandemic. This led to a decline in sales revenue in some product segments. In the second half, rebound and catch-up effects increasingly set in. In particular, demand was high for products such as diagnostic membrane and pipette tips used as part of coronavirus testing. The division’s bioanalytics portfolio that includes the protein analytical business acquired from Danaher also grew dynamically. Order intake rose even more strongly than sales revenue, climbing 26.4 percent (reported: +24.1 percent) to 598 million euros.

Underlying EBITDA1 for the Lab Products & Services Division rose by 13.2 percent from 103 million euros3 a year earlier to 116 million euros in the reporting year; the corresponding margin reached 21.0 percent relative to 21.6 percent3 in the previous year. The main reason for the slight decline was the weaker capacity utilization at some plants in the first half of the year due to the pandemic, while the most recent acquisitions had a positive impact of a good 2 percentage points on the division’s margin. Exchange rates did not have any significant effect on the division’s earnings margin.

Sartorius plans to grow profitably in 2021 as well. Consolidated sales revenue is thus projected to increase by about 19 percent to 25 percent. Initial consolidation of the acquisitions is expected to contribute about 5.5 percentage points to this growth, and the impact of the pandemic-related businesses on Group revenue is difficult to estimate at the present time and is likely to amount to up to 6 percentage points. Regarding profitability, the company forecasts that its underlying EBITDA1 margin will be about 30.5 percent, up from 29.6 percent a year earlier.

For the Bioprocess Solutions Division, the Executive Board expects sales to grow between 22 percent and 28 percent, with consolidation of the most recent acquisitions likely to contribute about 6 percentage points and the pandemic effects up to 8 percentage points. For the division’s underlying EBITDA1 margin, management forecasts a moderate increase to around 33 percent (previous year: 32.3 percent) after the underproportionate cost development as a result of the pandemic had additionally increased this margin in the prior year, especially in this division, and now that corresponding effects resulting from pent-up demand are included in this projection.

The Lab Products & Services Division is projected to increase its sales revenue by 10 percent to 16 percent, with the most recent acquisitions expected to contribute around 5 percentage points to growth. Pandemic effects are not anticipated unless laboratories will be closed again as part of potentially very extensive lockdowns. For the division’s underlying EBITDA1 margin, a substantial increase to about 23.0 percent is forecasted (previous year: 21.0 percent).

All forecasts are based on constant currencies, as in the past years. In addition, the company assumes that the global economy will increasingly recover as the current year progresses and that supply chains will remain stable.

Mid-term targets up to 2025 updated

As early as 2018, management presented its strategy and long-term targets for the period of 2020 to 2025. The targets for 2025 have now been updated and partly raised, given the results achieved in the Bioprocess Solutions Division in 2020 and the resulting increase in the baseline values, as well as expectations of future organic growth in this segment.

These projections are based on the assumption that on average the margins of future acquisitions will initially be somewhat below and, after integration, at a level comparable to those of the Group’s existing businesses, and that there will be no relevant changes in the key currency exchange rates.
Management points out that the dynamics and volatilities in the life science and biopharma sectors have increased over the past years and the coronavirus pandemic has further amplified this trend, so that multi-year forecasts show even higher uncertainties than usual.

1. Sartorius publishes alternative performance measures that are not defined by international accounting standards. These are determined with the aim of improving the comparability of business performance over time and within the industry.

3. Sales revenues and margins of the divisions in the comparable period adjusted to reflect the reallocation of two small product segments

This press release contains forward-looking statements about the future development of the Sartorius Group. Forward-looking statements are subject to known and unknown risks, uncertainties and other factors that could cause actual results to differ materially from those expressed or implied by such statements. Sartorius assumes no liability for updating such statements in light of new information or future events. This is a translation of the original German-language press release. Sartorius shall not assume any liability for the correctness of this translation. The original German press release is the legally binding version.