Weighing requires accuracy, especially when the readability of a balance reaches 0,01mg or more. However, in many applications the samples being weighed might be harmful or dangerous for the operator and the use of a fume hood is required in order to protect the laboratory personnel. Air flow, drafts and vibrations can adversely affect the weighing performance of any balance and eventually cause errors to the measurement. Such errors can further have negative effect on analysis performed with the use of a balance as well as processes in which weighed samples are required.

Protection of the operator is made possible with the use of ERLAB Ductless Filtering Fume Hood Captair 391 Smart. This unit is specially designed to protect users against inhalation of chemicals. It can embed molecular filters and particulate filters depending on the needs of the application. This protection device complies to safety international standard, such as NFX 15211. To achieve this efficiency and a high level of containment, face velocities of the units must be maintained above 0,4 m/s which requires a total airflow higher almost equal to 220 m3/h. Despite this airflow, the unit is design in order to minimize turbulent airflows in the enclosure and to absorb vibration that could be generated by the fan. The tested Captair 391 was also equipped with an optional Trespa Toplab benchtop in order to minimize conduction of vibration to the balance.

Weighing with high accuracy is made possible with an OHAUS Explorer Semi-Micro balance, a modular model that can be easily fitted in to the fume hood. In addition, a set of four infrared touchless sensors combined with an Ionizer and automatic doors as well as a grid pan bring the level of vibrations to the minimum. The display can be separated from the base of the balance to a distance of up to 1,5m with a standard cable included. The automatic doors as well as the ionizer, tare and a number of other commands can be actioned with the use of four touchless infrared sensors. This way there is no need for the operator to touch the balance during the weighing procedure which both adds to the protection of the operator as well as minimizes disturbances influencing the balance’s performance. An accessory grid pan helps the balance to stabilize up to 1s faster.

The model used for validation was the Explorer EX225D/AD equipped with an accessory grid pan. Balance’s readability is 0,01mg up to 120g capacity and 0,1mg from 120g to the full capacity of 220g. This particular model has a standard automatic door feature and a built-in ionizer for removing static charges from the samples as well as weighing boats or any other containers.

The following tests have been performed:

All tests were performed twice, with and without the air flow turned on and in both cases the results obtained were within the limits of PN-EN 45501 for Non-Automatic Weighing Instruments.

Two test procedures have been performed, up to maximum 120g and 220g capacity separately. Both of these were done with and without the air flow turned on. For each procedure a selection of test weights was placed on the pan in ascending and descending order. In both cases, for each maximum capacity, the results obtained were within the limits of maximum permissible errors as described in the norm.

Since the balance is a dual range instrument, two test procedures have been executed. For the 0,01mg readability range a 40g test weight has been used and for the upper range with 0,1mg readability a 70g and 75g test weight load has been used. Tests were performed both with and without the air flow turned on. Obtained results met the criteria described in the norm. 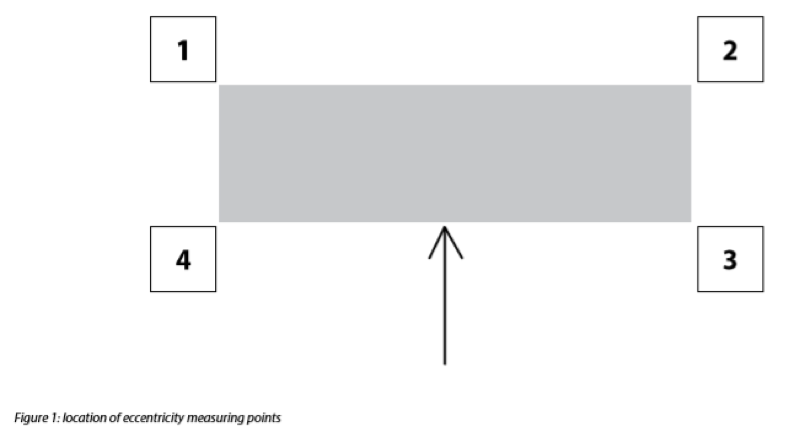 Test results have shown that the balance’s performance when placed under a running fume hood does not change drastically, allowing the balance to perform still within the limits imposed by the EN-PN 45501 for Non-Automatic Weighing Instruments. Vibrations and air-flow disturbances caused by the Ductless Filtering Fume Hood Captair 391 Smart have no negative effect on EX225D/AD performance. This duo allows for both safe and accurate measurements.