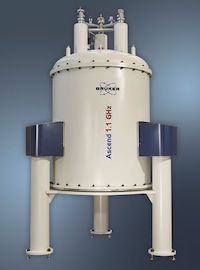 Bruker has successfully energized the world’s first stable and homogeneous standard-bore Ascend 1.1 GHz NMR magnet in late 2018. This magnet has been developed to address the scientific requirements for increased sensitivity and higher resolution in order to study larger proteins, functional disorder, and macromolecular complexes.  In recent months, Bruker and some of its key UHF collaborators have demonstrated the power and advantages of this leading-edge technology in a series of high-resolution and solid-state NMR experiments at Bruker’s Swiss GHz-class magnet factory.

For many years, high-resolution NMR was limited to a magnetic field of 23.5 Tesla, equivalent to a 1H resonance frequency of 1.0 GHz. This limit was set by the physical properties of metallic, low-temperature superconductors (LTS), and it was first reached in 2009 with an Avance® 1000 spectrometer at the Ultra-High Field NMR Center in Lyon, France.

“This record-breaking 25.9 Tesla NMR spectrometer is a showcase of our technological capabilities in the area of LTS-HTS hybrid superconducting magnets, and also in the areas of UHF NMR probe and spectrometer development,” said Dr. Falko Busse, Group President of Bruker BioSpin. “Bruker is proud to once again provide a new frequency NMR instrument to the life-science research community to push the frontiers in biochemistry, structural biology and material science. This 1.1 GHz system is also a key milestone towards the first 1.2 GHz NMR magnets that we have in development.”

Professors Lucia Banci and Claudio Luchinat at the Magnetic Resonance Center and Department of Chemistry at the University of Florence in Italy are long-standing partners in Bruker’s UHF project and are expected to receive the world’s first high-resolution 1.2 GHz spectrometer. After performing experiments on the 1.1 GHz system, they stated: “We appreciate this important milestone in UHF NMR.  The 1.1 GHz results we achieved at this new field strength with a 3 mm TCI CryoProbe are a spectacular step forward, as they enable us to study intrinsically disordered proteins in more detail at atomic resolution levels. The data we recorded at 1.1 GHz highlight the benefits of performing NMR experiments at ultra-high fields, and we look forward to the next step at 1.2 GHz.”

“We are truly impressed with Bruker’s UHF magnet technology, which we were able to test in conjunction with a 111 kHz magic-angle spinning (MAS) solid state NMR probe. The clearly improved sensitivity will be a key feature for biological and biomedical research, e.g. for protein complexes and Alzheimer-beta fibrils,” commented Professor Beat Meier of the ETH Zürich, another future 1.2 GHz customer. Professor Matthias Ernst from ETH continued: “The sensitivity of this new instrument is impressive and will enable new applications in the area of proton-detected fast MAS experiments. The homogeneity of this new class of HTS-based magnets – which had been a concern in the community – is impeccable and meets our stringent requirements.”

Dr. Christian Griesinger, Director and Scientific Member at the Max Planck Institute for Biophysical Chemistry in Göttingen, Germany, observed: “In combination with the static X-ray structure, this 1.1 GHz data quantitatively explains the FRET (Förster resonance energy transfer) efficiency for the first time .  This quantification is now a firm basis for developers of sensors to further optimize calcium-sensors which are essential to measure calcium concentrations in neurons with spatially resolved fluorescence and therefore a tool in neurobiology. We are looking forward to receiving our 1.2 GHz spectrometer, which we will use for our current projects on characterizing droplets and oligomers of intrinsically disordered proteins that are the key players in many diseases, such as neurodegeneration and cancer. These important disordered systems currently cannot be studied at Angstrom resolution with other methods in structural biology, such as X-ray crystallography or cryo-EM.”

Dr. Charalampos Kalodimos, Chair of the Structural Biology Department at St. Jude’s Children Research Hospital in Memphis, Tennessee, is expected to receive the world’s first 1.1 GHz NMR spectrometer, once all factory tests have been completed. He added: “We look forward to receiving the first 1.1 GHz NMR spectrometer in our institution later this year. The 1.1 GHz system will be our most important tool to perform research in the area of dynamic molecular machines, such as molecular chaperones and protein kinases. We commend Bruker on this impressive technological achievement.”

Bruker also announced today that it has received an additional purchase order for a 1.2 GHz NMR system from Professors Hartmut Oschkinat and Adam Lange from the Leibniz-Forschungsinstitut for Molecular Pharmacology in Berlin, Germany. Bruker now has received orders for a total of nine 1.2 GHz NMR spectrometers, so far all in Europe.