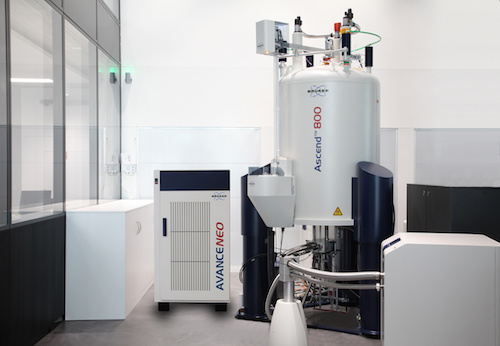 At the 58th Experimental Nuclear Magnetic Resonance Conference (www.enc-conference.org), Bruker announces the launch of the AVANCE NEO platform, Bruker’s next-generation NMR electronics console in the AVANCE series. The all new AVANCE NEO surpasses the already very advanced AVANCE III HD by offering even faster control, improved dynamic range and enhanced flexibility and scalability. The AVANCE NEO frequency range is extended to 1.2 GHz and beyond, and the AVANCE NEO also features a novel transceiver architecture, which combines transmit and receive functionality for every channel, offering enhanced experimental control, especially for the rapidly increasing number of multi-receiver NMR applications. As a result of the new ‘Transceive’ architecture, each AVANCE NEO NMR system now offers multiple receivers as a standard feature.

The AVANCE III series has been the most successful NMR platform of the last 10 years. The all-new AVANCE NEO is the definitive research platform for enhanced multi-channel / multi-receive NMR experiments.  The novel transceiver architecture essentially enables each channel of the AVANCE NEO to operate as a fully functional spectrometer. Novel NMR multi-receive experiments can now be implemented for any combination of nuclei, with 4 receiver channels now standard for typical HCN-D biological NMR systems.

With the introduction of the AVANCE NEO, Bruker also launches its new NMR software, TopSpin® 4, which introduces the forward-thinking concept of an embedded acquisition server with client-server architecture. This permits running the spectrometer independent of the client computer, and provides users with the opportunity to control the system via their chosen operating system. Both the AVANCE NEO platform and TopSpin 4 software are now available for high-end and research NMR spectrometers up to 1.2 GHz, while the AVANCE NanoBay system is offered for routine, small molecule applications.

The AVANCE NEO has undergone extensive Bruker applications laboratory and customer field testing, and is already successfully producing excellent results at numerous key customer sites. For example, Professor Muriel Delepierre of the Institut Pasteur in Paris, stated: “We are very pleased to have received the next-generation AVANCE NEO with our recently installed 800 MHz system. We are delighted with our initial results, the flexibility offered through the large database of existing experiments, and with the outstanding sensitivity in combination with our CryoProbe™.”

ENC 2017, held at Asilomar, California, brings together experts from the global NMR community.