MediSieve, the company behind the groundbreaking magnetic sieve that removes malaria-infected blood cells directly from patients' blood, has received a Phase 1 EU SME Instrument grant of €50,000. 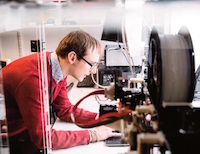 The grant will help MediSieve develop its filter device to treat sepsis - an expansion of its work in treating malaria. In the treatment, targeted magnetic particles combine with the MediSieve magnetic filter to remove pathogens - bacteria and endotoxins - from sepsis patients in intensive care units.

In an era of increasing antibiotic resistance, sepsis is a huge and growing global problem. In the UK there are over 100,000 cases and 37,000 deaths annually, making it responsible for up to eight per cent of deaths in England (McPherson, BMJ, 2013).

Across the EU, 135,000 people die every year from sepsis. In the US, the disease claims 350,000 lives annually and accounts for 5.2 per cent of the country’s healthcare spending.

With mortality rates from sepsis reportedly over 30 per cent, the need for better treatments for people with the disease is increasingly urgent.

MediSieve will use its Phase 1 EU SME Instrument grant to carry out market research, business planning and laboratory proof of concept work. The project will start in early 2017 and run for six months. When it completes this work, the company then plans to apply for Phase 2 of the SME Instrument, which could support clinical trials.

George Frodsham, CEO of MediSieve, said: "We’re thrilled with this success as the EU SME Instrument is very competitive. With this grant, we can start expanding our magnetic filter technology from malaria into other blood borne diseases, which has always been our objective. This is yet further recognition of the potential of magnetic blood filtration as a tool for treating blood borne diseases and delivering real benefits to patients.”

Dr Frodsham founded MediSieve in 2015. In the months since, the company has also:

MediSieve's treatment could be used when malaria drugs become ineffective or to supplement existing drug treatments. The magnetic device is aimed at the most vulnerable malaria patients - those whose cases are severe or drug-resistant. It could help patients recover faster, keep symptoms at bay and increase their likelihood of survival.

In the future, the magnetic blood filtration technology could be used to treat a wide range of blood-borne diseases such as sepsis and leukaemia, by removing specific disease causing components from blood.