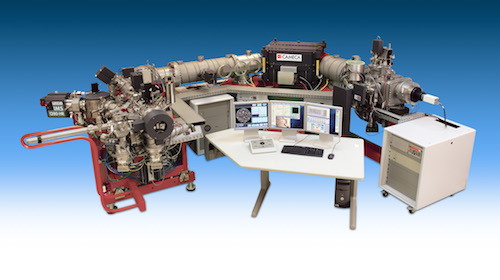 An international team of geoscientists, utilizing advanced microanalytical instruments, has determined that a tiny fragment of zircon crystal from Western Australia is about 4.4 billion years old, making it the oldest confirmed intact piece of the Earth’s crust. The crystal, not much larger than the width of four human hairs, was analyzed using the latest Atom Probe Tomography (APT) and Secondary Ion Mass Spectrometry (SIMS) instrumentation from CAMECA®, a unit of the Materials Analysis Division of AMETEK®, Inc.

The research team, led by Dr. John Valley, a Professor of Geoscience at the Unversity of Madison-Wisconsin, revealed in an article published in February in the journal Nature Geoscience that a 400-micrometer zircon crystal from the Jack Hills of Western Australia was formed 4.4 billion years ago, just 160 million years following the formation of the solar system.

The study builds on earlier studies that used lead isotope information to date Australian zircons and identify them as the oldest samples of the Earth’s crust. The translucent red zircon crystal, which glows blue when bombarded by electrons during electron probe microanalysis, was confirmed by the recent study to be the oldest known material of any kind from Earth.

The Earth itself is considered to be about 4.5 billion years old. The team’s results strengthen the theory of a “cool early Earth,” where temperatures were low enough for liquid water, oceans and a hydrosphere to form less than 200 million years after the planet’s crust congealed from a sea of molten rock, according to Dr. Valley who led the study.

The mineral zircon is the “gold standard” for U-Pb (uranium-lead) geochronological dating. It is highly resistant to modification and able to survive multiple cycles of weathering, transport and re-deposition. However, the decay within the crystal of uranium and thorium isotopes to lead can damage the atomic structure and result in some isotopes moving within the grain and diffusing along small defects in the crystal, which could result in an erroneous age calculation.

Atomic and microanalysis of the sample utilizing CAMECA’s instruments found that instead of being randomly distributed in the sample as earlier predicted, the lead atoms were clumped together like “raisins in a pudding,” according to Dr. Valley. The lead atom clusters formed one billion years after crystallization by which time some uranium had decayed into lead that then diffused into clusters.

“The zircon formed 4.4 billon years ago, and at 3.4 billion years, all of the lead that existed at that time was concentrated into hotspots, which allowed us to read the thermal history of the zircon like time capsules,” notes Dr. Valley. The formation, isotope ratio and size of the clusters, less than 50 atoms in diameter, became in effect a clock, verifying that existing geochronology methods could provide reliable and accurate estimates of the sample’s age.

Additional measurements allowed the scientists to determine the oxygen isotope ratios of the zircon samples, giving evidence of early homogenization and later cooling of the Earth.

APT technology proved uniquely capable for analyzing the zircon crystal. It is the only material analysis technique offering extensive capability for both 3-D imaging and chemical/isotopic composition measurements at the atomic scale. Since their development in the 1960s, atom probes have contributed to major advances in materials science.

The system operates on the principle of field evaporation, whereby a strong electric field applied to the specimen is sufficient to cause removal of atoms by ionization. Proprietary single-particle detection enables both isotopic identification by time-of-flight mass spectrometry and positional determination. CAMECA’s LEAP system offers high data quality as well as improved ease-of-use via prefabricated Microtip™ specimen carriers, which permit multiple samples to be prepared, mounted and loaded into the instrument for maximum efficiency for multi experiment scenarios.

Zircon has long been recognized as the most important geochronometer, when examining the earliest parts of the Earth’s history and several key instrumental features of the IMS 1280-HR – such as high transmission at high mass resolution -  make it the best suited instrument for U-Pb zircon dating. Thanks to its unique capability for simultaneous detection of several isotopes, the IMS 1280-HR also provides excellent precision and reproducibility for oxygen isotope measurements in zircon.

CAMECA® has more than 60 years of experience in the design, manufacture and servicing of scientific instruments for material micro- and nano-analysis. Since pioneering Electron Probe Microanalysis (EPMA) instrumentation in the 1950s and Secondary Ion Mass Spectrometry (SIMS) in the 1960s, CAMECA has remained an undisputed world leader, while achieving numerous breakthrough innovations in such complementary techniques as Low-energy Electron-induced X-ray Emission Spectrometry (LEXES) and Atom Probe Tomography (APT).

Headquartered near Paris, CAMECA also has a production facility in Madison WI, USA where the LEAP APT is designed and manufactured, further locations in Brazil, China, England, Germany, India, Japan, Korea, and Taiwan. CAMECA is a business unit of the Materials Analysis Division of AMETEK® Inc., a leading global manufacturer of electronic instruments and electromechanical products.