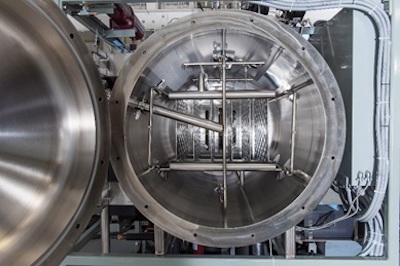 The SP Scientific LyoConstellation system is planned for use on multiple projects to support early to late phase development including GMP production of small batches for Phase 1 and Phase 2 clinical trials.

The LyoConstellation provides the flexibility in that it could be used aseptically within a GMP environment as well as for lyophilization development in relation to the small-scale manufacture of parenteral products. SP Scientific have a strong heritage in freeze-drying technology and offer a range of proprietary technological innovations such as ControLyo® controlled nucleation and TDLAS (LyoFlux®) which are proven to assist in developing challenging formulations from R&D to smaller production scale in a clinical setting.

The LyoConstellation S10 is a Line of Sight™ enabled freeze-drying system for undertaking early stage development under aseptic and controlled conditions. This means product behaves in the same manner once it is ready for scale-up and eventually ready for commercialization. Offering a capacity of 9.8 ft2 (0.85 m2) and precise shelf temperature control from -55°C to +65°C, the LyoConstellation S10 is designed, even when fully loaded, to hold 100mTorr vacuum and shelf temperatures of over +40°C enabling unmatched sublimation rates with high moisture applications with no evidence of choked flow. Isolator and cleanroom integratable, the LyoConstellation S10 is capable of clean-in-place (CIP) and steam-in-place (SIP) for aseptic manufacturing.

CFR Part 11, are common to the full range of SP Scientific freeze dryers enabling the same technologies and equipment to be used for both R&D and production.

more on the LyoConstellation™ S10