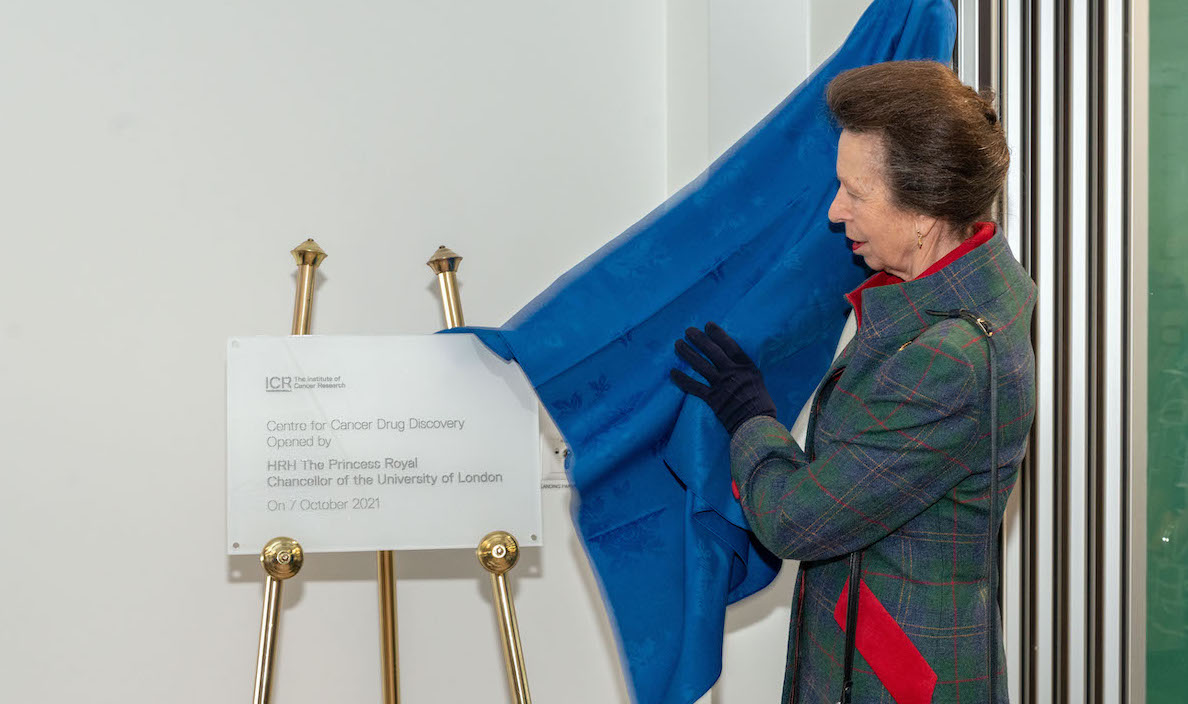 Her Royal Highness The Princess Royal has officially opened the Centre for Cancer Drug Discovery and toured the centre to learn more about its work to overcome cancer’s ability to evolve and become resistant to treatment.

Scientists at the pioneering centre, which is on the Sutton site of The Institute of Cancer Research, London, aim to discover new types of treatment that could allow cancer to be controlled in the long term, and ultimately cured.

Her Royal Highness heard from scientists from a range of disciplines, including biologists, chemists, clinicians, computational scientists, and evolutionary experts, who all work alongside each other in the ICR’s Centre for Cancer Drug Discovery. They showed Her Royal Highness some of the building’s cutting-edge equipment and demonstrated how this helps them make groundbreaking discoveries which will lead to more and better drugs for cancer patients.

The Centre for Cancer Drug Discovery is state of the art and brings together around 300 leading scientists in one collaborative space with a key goal – to overcome cancer drug resistance so people with cancer can live longer, healthier lives, and ultimately be cured of their disease.

Cancer evolves and adapts to its environment and to treatment, which can make it resistant to the therapies designed to kill it. This is the single biggest challenge for cancer researchers and clinicians. Cancer cells, in a patient who might have initially responded well to treatment, can pick up mutations that allow them to avoid being killed by a drug or therapy – and the tumour then stops responding and starts to grow and spread again.

The Centre for Cancer Drug Discovery spans 7,300 square metres and cost £75m – a major proportion of that coming from donations to the ICR, which is both a research institute and a charity. Her Royal Highness saw some of the new biology, chemistry and computational laboratories – as well as the all-important meeting rooms and collaboration hubs, which encourage creativity and cross-disciplinary working.

As part of the visit, Her Royal Highness also met some major donors whose support has helped fund the new building and unveiled a plaque to commemorate the official opening of the new centre. The ICR continues to seek philanthropic support to fit out the building further and ensure the scientists working within it are as well-equipped as possible, so they can make their discoveries faster.

Her Royal Highness last visited the ICR’s Sutton campus to open another cancer research centre, the Brookes Lawley Building in 2003.

The ICR’s hospital partner, The Royal Marsden NHS Foundation Trust, is located next door on the Sutton site. This partnership helps to drive forward better treatments for cancer patients by taking the results of cutting-edge research from the laboratory into the clinic.

In addition, Sutton is home to The London Cancer Hub – a collaboration between the London Borough of Sutton and the ICR – and the centre is one of its flagship buildings. The London Cancer Hub, once completed, will enhance the ability of scientists at the ICR to partner with industry to take their discoveries to market where they can benefit people with cancer.

“It has been an honour to welcome Her Royal Highness back to the ICR and share the exciting progress we have made in cancer research since the last visit nearly two decades ago.

“As world leaders in this field, we've discovered 20 cancer drug candidates and progressed 11 drugs into clinical trials since 2005 and the ICR-discovered drug abiraterone is now used as standard treatment for advanced prostate cancer worldwide. But there's still much more to do to make cancer a manageable disease in the long term and one that is more often curable, so patients can live longer and with a better quality of life.

“Our pioneering Centre for Cancer Drug Discovery signifies our unwavering determination to make the discoveries that defeat cancer and today’s official opening marks a key milestone in our journey to tackle this disease and bring hope to future generations.”

“I was immensely proud to be able to introduce members of my team to Her Royal Highness and explain our work creating new drugs to improve the lives of people with cancer.

“After the disruption of the coronavirus pandemic, this new centre has allowed research groups from a whole spectrum of scientific expertise to come together to share ideas and tackle our united goal of discovering new ways of treating cancer that can overcome drug resistance and benefit patients.

“This collaborative approach will accelerate our work to find smarter and kinder therapies and help us stay one step ahead of the disease – which is increasingly urgent as delays in diagnosis and treatment as a result of the pandemic have left many cancer patients more vulnerable than ever.”

Lara Jukes, Director of Development at The Institute of Cancer Research, London, said:

“Today’s official opening by Her Royal Highness is the culmination of many years of planning, fundraising and commitment.

“As a charity, we rely on the donations of individuals and organisation to further our world-leading research. Our new Centre for Cancer Drug Discovery has been made possible by the amazing generosity of philanthropic funders, donors and partners – and we are incredibly grateful for their support.

“But this is just the beginning: with the impact of the coronavirus pandemic, fundraising remains challenging and we need continued support to get research in the new centre off to the strongest possible start.”

A college of the University of London, the ICR is the UK’s top-ranked academic institution for research quality, and provides postgraduate higher education of international distinction. It has charitable status and relies on support from partner organisations, charities and the general public.