Greg Foot, Science Presenter on the BBC and YouTube will be speaking at Lab Innovations 2016, the UK’s leading event dedicated to laboratory professionals, which returns to Birmingham’s NEC on 2 & 3 November. 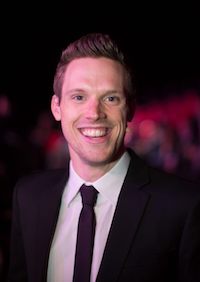 Q&A science special with Greg Foot, Science Presenter on the BBC and YouTube:

Q. You recently visited the world’s highest pop-up lab, at the Everest Base Camp. How did the trek come about and what did you uncover whilst you were there?

I actually first heard about the trek whilst sharing a curry with my friend who is a professor at UCL. I was told that a group of scientists were trekking to Everest Base Camp so they could   analyse why people cope differently in an area of low oxygen. I thought it sounded like an incredible journey, and would produce some really cutting-edge science, which I felt I would try and share with the world.

I was then fortunate enough to receive support from the Wellcome Trust, the world's largest medical research charity funding research into human and animal health, who funded the trip.

The group I travelled with was made up of doctors and scientists who work in Intensive Therapy Units (ITUs). They all have patients that are incredibly ill, with the most common problem being that they have a lack of oxygen in their body. It is common practice that these patients are often too ill to have tests performed, so they decided to run the tests on healthy patients in a low oxygen environment. These altitudes allowed similar conditions to be reached, but with no detrimental effects to the patients.

I am thrilled to say that the results unearthed at Everest Base Camp will directly lead to new treatments and new ways to care for people in ITU. This has strong implications for all of us, especially as one in five of us will end up in ITU. It was a fantastic experience to be part of, and a truly ground-breaking from a medicinal and scientific point of view.

Q. In a polar-opposite journey, you dived 1,000ft below the ocean to measure the health of the planets beating heart. Can you detail what you encountered and if any of your findings are going to have a lasting impact on ‘life’ as we know it?

Firstly, let me say that although I think my Everest trek will probably have a bigger impact on life, the dive was still hugely significant. The ocean is so important for driving the temperature of the planet, and is also home to one of the biggest sources of protein (fish) in the world. Plus, it provides over half of the oxygen that we breath. As a result, the health of the ocean has massive implications to our health and the health of our planet.

The scientists I teamed up with were trying to analyse how healthy the ocean is. They were drawing a baseline of readings, which allowed them to see the state of ocean now in comparison to past readings. Perhaps more importantly, they were taking a series of benchmark tests, which we can cross reference in the future to see what impact we are having. We were also able to check the biodiversity of the ocean and its corals.

Q. What and where is your next big expedition?

I don’t actually have my next trip planned, but I certainly have my eyes peeled and ear to the ground. After Everest and the dive I would like to keep the trend of exciting scientific adventures coming, but it must have an actual mission and outcome. I want to be part of something great, and I am sure it will be just around the corner. In the meantime, I will stay busy doing my presenting and posting on my YouTube channel.

Q. How do we encourage people, especially the next generation of talent, to get involved in science?

This is a great question, and my number one passion. As a science presenter I always try to engage the next generation. In my view every child is essentially a scientist. They are really curious about the world and are always asking questions. I would however like to pinpoint the moment people are turned off by science. I understand that there is an array of factors that could put someone off science, but no more so than any other subject or industry. Is it something fundamental or is it all a miss-perception of science?

It is vital that we stay curious. As adults we are afraid to ask questions, because we get embarrassed or we are scared of how we might look, but this is quashing our children’s curiosity. Keeping people interested and curious is an exciting part of my job. I recently did a nationwide theatre tour around the UK, which was all about asking questions. Of course I did a little preparation for this by Googling the most frequently asked questions. Do you know any of the below?

Q. Do you think science as a career has a strong enough reputation?

I hope so! The reality is that we do not have enough science, tech, engineering and maths graduates to fill the number of jobs available. This is actually good news for those studying a STEM subject, because there are high odds of going into a great job. This cannot be said for a number of other careers.

The reputation of science and scientists is getting better and better, but practitioners have a role to play in maintaining the engagement, reputation and curiosity. I also think that they need to share their passions with the younger generation, so they can see the opportunities and want to stay with science as they grow up.

Q. What do you think will be the next big ‘unveiling’ in the science community?

Gosh, I am really not sure, but I can’t wait to find out. It could be particle physics that comes from a massive experiment, or the latest breakthrough in medicine as a result of research, or perhaps an expedition similar to one I undertook. The possibilities are endless!

Greg Foot will be speaking as part of the Royal Society of Chemistry theatre at Lab Innovations 2016, the UK’s only dedicated event for laboratory professionals held on 2 & 3 November 2016 at NEC, Birmingham.  Pre-registration is free and highly recommended to avoid the queues.