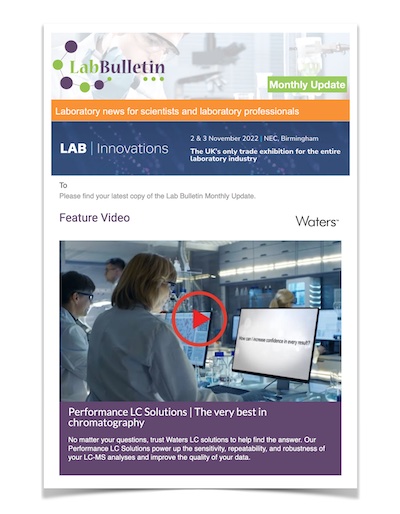 A Queen's Award for Enterprise for International Trade 2012 has been awarded to NanoSight, the UK's fastest growing biotechnology company

publication date: May 3, 2012
|
author/source: Talking Science Limited
NanoSight, leading manufacturers of unique nanoparticle characterization technology, are pleased to announce that the company has been selected to receive the Queen's Award for Enterprise in the category for International Trade 2012.

This award comes after many other prestigious awards in the past twelve months, notably the Technology World 2011 Business Innovation Award presented by Vince Cable, Secretary of State for Business, Innovation and Skills and President of the Board of Trade, and after being named the UK's fastest growing biotechnology company by Deloitte. NanoSight was founded in 2004 by Dr Bob Carr and John Knowles after Carr discovered a technology which allows particles so small they were below the normal optical microscope limit to be seen, sized and counted in less than a minute for a fraction of the cost of electron microscopes.

Since 2005, NanoSight has grown sales by around 70 per cent annually, year on year, and now employs 25 people in the UK. The firm sells its products all over the world, with around 90 per cent of its sales outside the UK. The most significant growth is in pharmaceuticals and life sciences, where budgets have remained largely unaffected by the global financial condition. There are now more than 450 NanoSight instruments in use worldwide and this number continues to grow as the firm's products are cited almost daily in fresh academic papers, a list which now totals over 400.

Speaking about the importance of this award, Dr Carr said "While we have naturally been proud of our progress to date, being considered worthy of such recognition as the Queen's Award really does give us a huge boost in confidence and enthusiasm. It is particularly exciting to see the response of our international colleagues and customers to this award."

Looking forward, the company expects to sustain growth in the coming years. Their Nanoparticle Tracking Analysis technology has become increasingly important in the characterization of nanomaterials. At the end of 2011, the EU announced a new definition for nanomaterials which suggests many companies will now be required to measure the number and size of the nanomaterials in their products. With NTA's ability to handle this challenge measuring particles in the 10nm to 1000nm range, the future for growth remains rosy.

To find out about the company and to learn more about particle characterization using NanoSight's unique Nanoparticle Tracking Analysis solutions, visit http://www.nanosight.com/ and register to receive the next issue of NanoTrail, the company's electronic newsletter.

NanoSight delivers the world's most versatile and proven multi-parameter nanoparticle analysis in a single instrument.

NanoSight's simultaneous multiparameter characterization matches the demands of complex biological systems, hence its wide application in development of drug delivery systems, of viral vaccines, and in nanotoxicology. This real-time data gives insight into the kinetics of protein aggregation and other time-dependent phenomena in a qualitative and quantitative manner. NanoSight has a growing role in biodiagnostics, being proven in detection and speciation of nanovesicles (exosomes) and microvesicles.