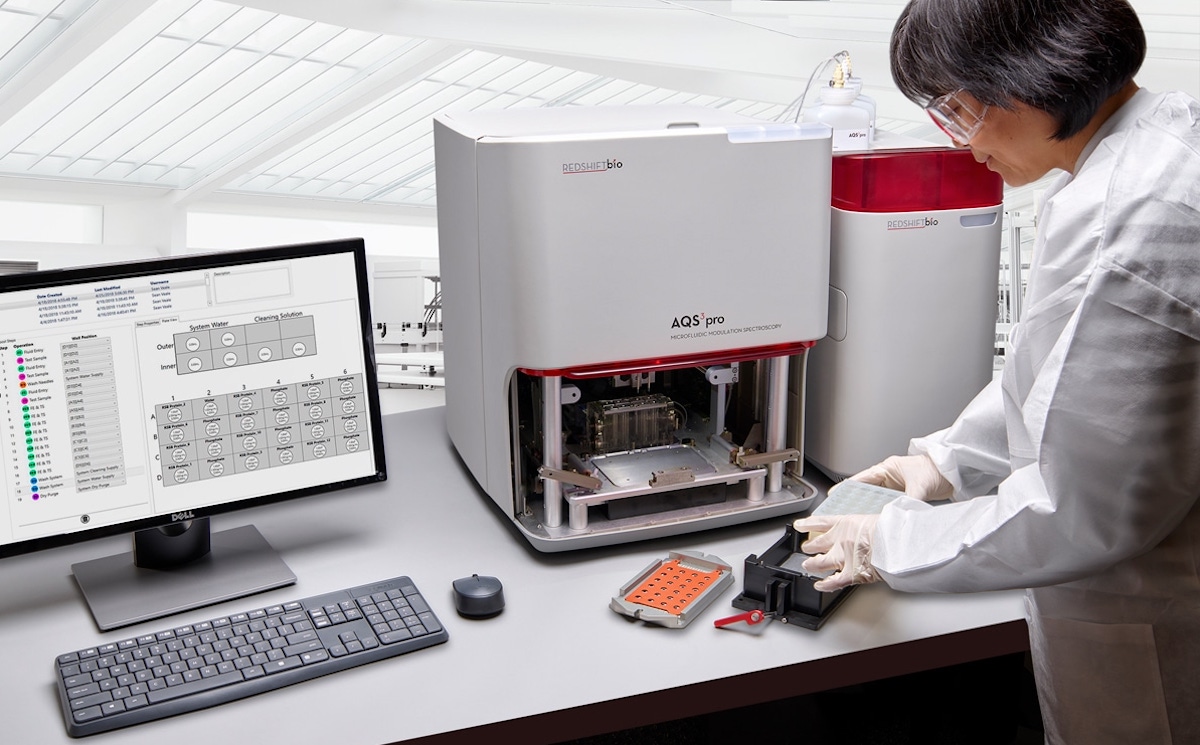 RedShift Bioanalytics’ instrumentation was crucial in ground-breaking developments in the detection and treatment of Alzheimer’s Disease (AD).

The AQS3™pro, based on the company’s proprietary Microfluidic Modulation Spectroscopy, provided scientists from the University of Washington insight into the formation of small amyloid beta aggregates, the elements now believed to cause cognitive impairment typical in AD. The findings, published April 19 in the Proceedings of the National Academy of Sciences, indicate that amyloid beta oligomers — not plaques — are the toxic agents behind Alzheimer’s disease. The results also suggest that synthetic alpha sheets could form the basis of therapeutics to clear toxic oligomers in people.

Amyloid beta proteins are formed by neurons in the brain. Single instances of these proteins (monomers of amyloid beta) perform important tasks, however when amyloid beta monomers join together - aggregate- as in the brains of people with Alzheimer’s disease, they malfunction. Ultimately they form large deposits called plaques which were believed to trigger the cognitive impairments in Alzheimer’s disease. Recent research, however, implicates the smaller aggregates of amyloid beta as the toxic elements of this disease.

The team led by Prof. Valerie Daggett at the University of Washington, developed synthetic peptides that target and inhibit those small, toxic aggregates. These synthetic peptides — which are designed to fold into a structure known as an alpha sheet — can block amyloid beta aggregation at the early and most toxic stage when oligomers form.

Using the AQS3pro, Daggett’s team observed the individual stages of development of amyloid beta clusters, from monomers to six- and 12-protein oligomers all the way up to plaques. The AQS3pro allows users to ‘see change’ in the secondary structure of proteins across a wide concentration range from 0.1 to over 200 mg/mL, and in the presence of excipients.

“Having deployed MMS alongside circular dichroism, FTIR and NMR for non-standard secondary structure analysis of β-amyloid oligomers in Alzheimer’s Disease, I am confident in the applications for the technology,” comments Daggett. “We believe it can play a significant role in the protein characterization technology toolkit, overcoming shortcomings in existing techniques. In our case the quality of the results obtained, the small sample volumes, the ability to quickly probe low concentrations of amyloid proteins in solution under ‘physiological’ conditions. While there are many other interesting and important applications of this technology, RedShift Bioanalytics’ MMS platform fills a void in the amyloid field that is helping to shed light on the fundamental conformational changes associated with disease.”

RedShiftBio™ is a provider of innovative analytical instrumentation for the research, development and manufacture of protein therapeutic drugs. The company has developed a powerful new analytical technique, Microfluidic Modulation Spectroscopy (MMS) that enables direct probing of the biophysical structure of proteins. The patented MMS technology provides comprehensive secondary structure information across five key measurements, in a single automated analysis, replacing the requirement to run samples on multiple instruments.